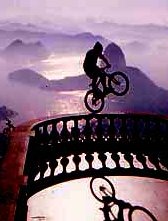 We are near the end of a 10 day trip though Brazil. Following an invitation of our friends from Pedal Power, the Brazilian Rockshox distributor, to come to their country to check out the biking scene and some of their greatest trails, sites as well as test the new 2002 RockShox products.

My partner for this trip is nobody less than British downhill legend Steve Peat.  As you are reading this we're in the jungles of  Sarawak/Borneo/Malaysia, searching to find out if there is still any evidence ofheadhunters to be found in the remote rainforest.

Today we accomplished day 4 of the "No Way Transalp" adventure. I'am trying to ride the most technical trails, or trails which were considered unridable for bikes, while visiting interesting landmarks along the way.I'am the only rider, although several of our team members us bikes to move along with me. Our team consists of 7 persons. I'am glad to have the best in their fields along on my tour. Bob and Estela Alen for still photography, our cameraman Bernd from Take One on the betacam, the legendary Glen Jacobs as second unit camera, our tour director Uli Stanciu who worked out the route, and last but not least the "Schwab" (Thomas Rebholz)our driver of the ALPS support bus and person for everything.

The latest Hans Rey adventure took place in Bolivia/South America.The challenge was to cross the Andes and drop into the Yunga (jungle) on a pre-Inca trail; and as it turned out, it might have been the most technical trail ever ridden on bicycles.Part of our team was Sara Ballantyne, a former XC World Champion, who had just returned from Morocco where her team had won the Eco-Challenge. Ira Vick was our third team member, an up and coming pro downhill racer (1997 NORBA Natl. DH Champion Semi Pro). 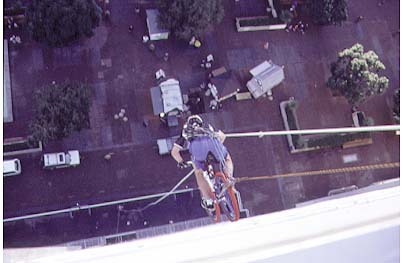