From A to Bo Lofoten Islands, Arctic Circle – No®way

By Hans Rey with Tobias Woggon

I had never heard of the Lofoten Islands until I was approached by an old buddy of mine and former racer Manfred “Mani-Shoot” Stromberg from Germany who was the photographer on this trip with German Enduro racer and photo rider Tobias Woggon.  We had never done a trip together before, but my curiosity was sparked when they showed me some photos of this stunning and rugged looking islands above the Arctic Circle in Norway.

This place is not very well known amongst mountain bikers , apparently because it’s a backpackers paradise and the hiking trails and terrain are just too steep to ride off-road, especially in the Southern part of the islands, where we were bound for. Sounded interesting enough for me to take a closer look and give it a go. Tobias had been there the previous year, but without a bike – he told me the place was amazing but wasn’t sure how rideable these trails would be.

Snow, ice and cold temperatures come to mind when one hears about the Arctic Circle, but also the mid night sun, the Northern Lights and of course a bit of Viking history, who settled on the islands some 1300 years  ago. 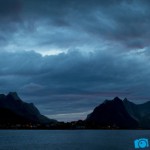 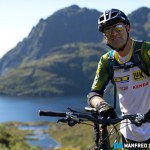 Although the summers are short on the Lofoten, the days are very long and they are very unique and surprisingly mild, due to the golf stream, that brings warm water and air to the Arctic waters of the Norwegian Sea.

Turns out that there are only a few dozen mountain bikers on the islands, almost all of them live in the more populated central and northern part of the Lofoten where the terrain is much more gentle with rolling hills. We contacted one of the locals, Tommy Amundsen, who was happy to give us advice and showed us some of his favorite trails, but it turned out he had never even attempted to ride on the Southern end of the islands, where our focus was. We read many guide books and hiking descriptions and the four of us planed to meet there in August 2013, too late for the midnight sun but still before the September weather would ring in another long and dark winter season.

We met up in Oslo and flew from their to Bodo, where we crossed the Arctic Circle, from there we took a 3.5hour ferry boat ride to the Lofoten, where we finally arrived at 4am in Reine, after traveling for nearly 2 days and after missing the prior ferry by 5 minutes, which resulted in a additional 7 hour wait. Reine is a quite and picturesque fishing village, we had made arrangements to stay in a typical red fishing cabin, known as “Rorbu”, converted to the comforts of the modern traveler. 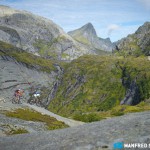 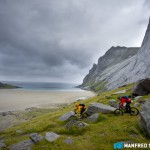 We set out to explore some of the notoriously steep hiking trails in various day trips around Moskenesoya, the Southern tip of the islands. I had brought my new GT Sensor 130mm bike, while Tobias was riding his BMC Enduro bike. Our first goal was to make it to the postcard picture spot, the Reinebringen Mountain, which grants unbelievable views over the fjords, countless lakes and ocean for those who take on the steep hike to the top. Getting up was not only steep, but the trail didn’t even look promising or fun for a descent, which is usually the motivation for a hard hike. The other problem was loose stones, combined with other trail users provided a big hazard, some guy almost got hit on the head by a tumbling rock days before, and a lady had fallen do her death after loosing her footing on the steep trail. After ascending for over an hour we arrived at the ridge, the views lived up to the photos we seen, only the clouds kept hiding and revealing the bay below in a constant game with our lenses. We continued further up the ridge, which had a good trail but eventually it stopped and we had to backtrack. I had the hopes we could continue across the top to connect to some trails further down on the other side, but the terrain got too exposed to move forward without safety robes. The downhill was great until we reached the steep part, which proved to be impossible to ride. I am constantly in search of steep and technical trails and to find my limits, I guess we found them that day, but that being said, the hillside we walked up and down, can hardly be described as a trail. I’m pretty sure no one before us had the crazy idea or determination to lug their bikes up and down this mountain.

We used the second part of the day to meet up with our local contact Tommy and ride one of this favorite Trails, near Leknes. This trail was about an hours drive to the north and the terrain was much more mellow and rideable on the uphill as well as the downhill 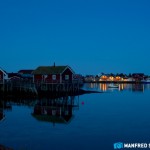 Tobias brought a fishing pole and off we went to catch some dinner. I knew Norway was known for fishing but I never thought it would be as easy as throwing the line in the water and pulling it back out, each time with a fish dangling from the hook.  Throughout the week this became a habit and Tobias turned out to be quite the cook. On another day we explored the Trails to the Munkebu hut, this must have been my favorite ride. We started not far from a village with the shortest name ever; “A”, shortly after we had left the trailhead the trail traversed over a big cascading waterfall, we worked our way up the valley passing and seeing no less than 16 lakes that day, even though we had to push and carry our bikes quite a bit on the way up, this terrain looked rideable at least downwards, even though it was still very technical. Trails in the Lofoten are not defined and ancient as they are in the Alps, where most trails are old trading routes  or military roads, that have been used and groomed for many years. The trails here are just used by some hikers during their short summer, nobody maintains them much nor are they built to accommodate a Roman army or horse caravans with goods to trade, as a matter of fact, these trails often don’t go anywhere, except some view-spots in the mountains and in this case to a mountain hut, maintained by the Norwegian Mountain Club. It took us 3 hours to get there, including a few detours, and although the way down was faster it was just as exhausting. The trail was challenging and technical, upper body strength was required to maneuver our bikes across the rocky trail. Big smiles. 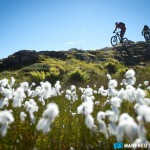 The nice weather shouldn’t last, it started turning on us when we took the little ferry to Vindstad, a tiny settlement with about 15 houses on the other side of the bay. Turns out only one woman lives there permanently and looks after the sheep, apparently she hasn’t left her hamlet once in 30  years, which is cut of by two big mountain ranges to the North and South and the open ocean to the West.

We ended up exploring the whole area, a high ridge protected the settlement from the natural elements the Arctic Ocean would bring across, once we crested the ridge a beautiful big beach presented itself and the on this very day rather calm ocean. Soaking wet we ended up at the pier, waiting along with some other day guests for the only ferry of the day. The following days we explored some more trails on the mountainous islands, the Ryten was another East/West traverse, it rained so hard that even the sheep were seeking shelter, but it didn’t slow me down, even though it took some convincing for the rest of our group to push on. Not only did it rain sideways but our trail literally turned into a river. It often made me wonder why the Vikings would have lived in such a harsh environment and how they coped with it, before they had highly technical outdoor gear and equipment like we had available.

Our last ride was not far from a village named ‘Bo’, I guess one can say we rode from A to Bo. As much as we can recommend this place for a visit, we kind of understand why most bikers here prefer to stay on the paved roads. No Way Norway.