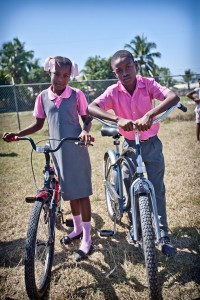 The MTB Ayiti event was organized this year for the first time with the ultimate goal of developing mountain biking in Haiti through local, microenterprise Haitian businesses. The Haiti Ascent Mountain Bike Stage Race is a cornerstone event – it’s more than just a race. This race will develop a mountain bike ecosystem in Haiti and provide a transforming experience to participants.

I was contacted by the organizer in the early planning stages last year. It sounded very promising, even though I’m not a racer anymore and never was into endurance racing – I thought it would make a nice ride to traverse this beautiful but poverty stricken Caribbean Island at my own pace. There was a great opportunity to tie in a Wheels 4 Life charity project and to help develop a local mountain bike infrastructure that could potentially attract mountain biking tourism in the future and help the grim economic situation that country is facing, especially after the devastation earthquake in 2010 that destroyed many cities and killed over 300,000 people.

The highlight of our event was a 2-day ‘race’ across the island, on a challenging and mountainous course, organized by no other than Sea Otter founder and race organizer Rick Sutton and his dialed crew. 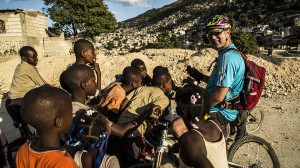 The brainchild of this event was Philip Kiracofe and his company Travelcology – he put a great team of individuals together to pull this event off. Including an American Film Crew that filmed everything for TV and Internet distribution. A number of riders from across the USA signed up for the inaugural race including former pro racer Marla Streb as well as some first time mountain bikers who signed up for the ‘experience’, not to forget about a dozen local riders, who were of course tougher than nails.

I wasn’t too excited when I read that the first stage would have over 8’000 ft of climbing, so I packed my lightest and fastest bike, the carbon Zaskar 100 29r – turned out to be the perfect bike for this ride. I felt sorry for all the hard-tail riders, when it came to the rockier than rocky 20 mile downhill during the second stage. 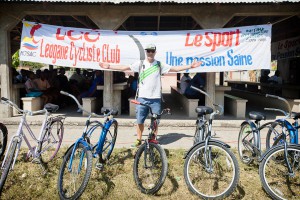 I arrived in the capital Port-au-Prince a few days earlier to organize the arrival of 25 bikes we had packed in a container in Miami with the help from the folks from Mack Cycles, to distribute to some local school children in need of transportation. With the help of the Leogane Cycling Club we organized the bike assembly and identified 20 children who had to cover long distances on foot daily to get to and from school. The other 5 bikes will be put to good use by the bike club to get more people involved in bicycles and to create opportunities for riders who don’t have their own bike.

A few participants from the race joined me when we handed out the bikes at the local school, while the others got ready for the race and went to the official press conference. The organizers of the MTB Ayiti event had brought in an additional 12 bikes which were being used by the local Haitian riders and would be used in the future as rental bikes to get a mountain bike touring business started. American rider David Wilcox was on hand to train some local mechanics and to distribute $7000 worth of bicycle tools. 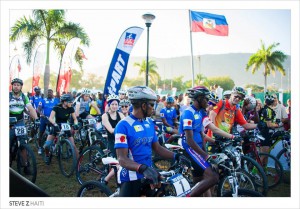 After meeting the Haitian Ministers of Tourism and Sports, we kicked of the first stage early morning downtown at the site of the former Presidential Palace that was completely destroyed in the earthquake and the ruins were only recently being cleared up. With police escort we pedaled through town, just before rush hour traffic got too crazy. The climb started right away and didn’t end until 3800 vertical feet and 2 and some hours later on a beautiful overview above the city. All 26 participants got shuttled for the next 10 miles to avoid a busy and dangerous mountain road, before we got restarted for the second and even harder part of day one. We had another 4500ft ahead, including nearly 2 hours of pushing and carrying our bikes up steep and rocky hillsides. The dirt road was rough and had some steep ramps, luckily there were some descents in between, where I could make up some time and give my legs and lungs a short break. The countryside was beautiful the mountains are numerous and up to 8800 ft. tall. The field spread out quickly – it took me a total of 5:47h for day one, while stage winner Sonya Looney did it in under 4 hours. I was happy to survive and I have to admit I actually had fun with the challenge as well as the course. It was nice to stop for some photos and talk to the crew or mingle with locals along the way, using the handful of Haitian Creole words I had learned. Once we got to the higher mountains the climate was fresh and we actually got rewarded with a couple miles of singletrails before we made it to the finish at our campsite. Right as I arrived near the finish line I notice another rider, Rob, in front of me – I couldn’t help it but go for the sprint  – I felt like Jaroslav Kulhavy when he beat Nino Schurter on the line at the Olympics. 😉 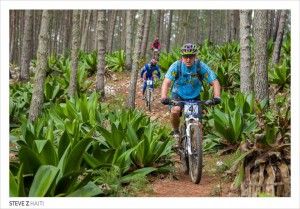 Night camp was in tents and the locals cooked us a fantastic meal. In the morning he had to ride a 6 mile singletrail loop twice before we went for the final 20 miles of downhill on a super rough and rocky road, not to mention the odd traffic, like oncoming motorcycles, goats, chicken and pedestrians. I was told about a stunt line, especially selected with me in mind along the course, a 30ft. long skinny wall 15ft. about a dry riverbed. While everybody had to dismount and climb through the river I was challenged to ride the 10-inch wide wall – which I couldn’t refuse – even though consequences would have been high at the remote location in the mountains. If the local coffee hadn’t woken me up yet, this scary passage sure got it done and my heart beating. Too bad I lost the GoPro camera that was mounted to the rear of my bike shortly after and never got to see the footage.

This stage took me about 3:23h, the downhill alone seemed to be never ending and lasted almost an hour and a half of solid beating and roughness for a XC bike – the key was not to get a flat tire. That stage had quite an enduro kind of feeling. We passed from the mountains through some beautiful terrain including farmlands and tropical forest; at the end we had two river crossings before we had a spectacular finish at the beach – showers in the Caribbean Sea – and off to the Carnival activities in Jacmel. It was a nice adventure with more than a twist – definitely a great inaugural event and experience for all of us. 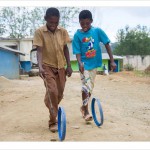 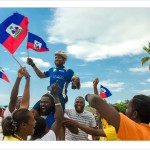 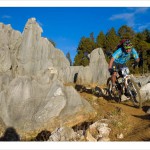 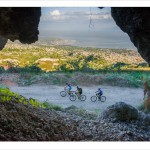 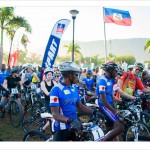 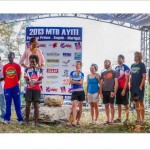 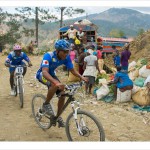 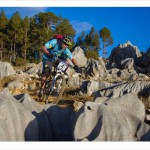 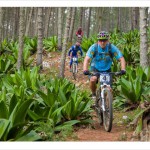 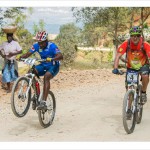 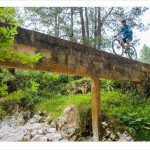 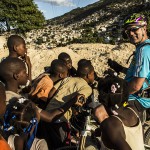 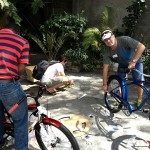 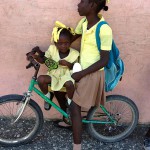 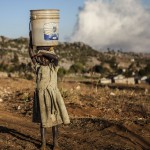 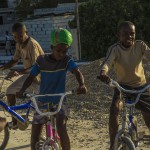 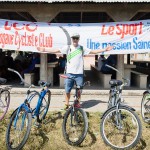 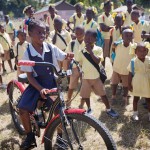 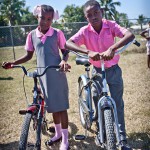