Peaty and I have been planning a trip to the Scottish Isle of Skye for a long time, when things finally started falling into place we invited YouTube sensation Danny MacAskill to join us. In whirlwind fashion the Scottish native has been living the dream of every kid in the world, since his film clip debut on the internet a little more than a year ago and has become the most watched sports-clip on YouTube of all time, with nearly 18 million viewers to date. 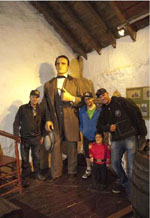 Traveling and riding with the freshly crowned downhill World Champion was not my first time and our team was complete with photographer Andy McCandlish, cameramen Rob Summers from Pro Active TV and Mark Huskisson from Reset Films as well as our guide and local tour operator Euan from H and I Adventures, www.mtbholidayscotland.com

With much luck I managed to land in Glasgow, ditching the volcanic ash cloud that stopped air traffic in many towns across Europe. Our crew and Danny picked me up from the airport and off we drove into the rolling countryside. First stop was the much filmed and famous fairytale castle of Eilean Donan, where we had a special permit for a trials session, unfortunately my Trials bike was in Peaty’s van, who’s arrival was delayed. I was a bit limited but still had a chance to sample some first impressions of Danny’s fantastic riding skills and enthusiasm. Despite the bad weather forecast we had sunny skies and enjoyed our ancient playground almost until sunset, which is not until 10:30pm this time of year.

trails, unlike many places around the world, cyclists are tolerated on all trails in Scotland. The scenery, landscape and trails were phenomenal from the mountain views to the ocean views, a perfect synergy of Highlands and Islands. Each of us had brought several different bikes for this trip, to be prepared for any style of riding. I brought my GT Force Carbon All Mountain bike, Ruckus 7 Freerider and my trials bike; Peaty was Santa Cruz equipped and Danny rode besides his Inspired bike some Orange rigs. 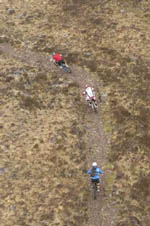 The Quiraing are massive, broken up craggy rock faces that tower over the lush meadows, surrounded by breathtaking views only accessible by an ancient trail. We challenged each other to little trials riding problems and it was good to see how much fun everybody had, even though we were “just” Cross Country riding.

Next stop, the Talisker whisky distillery, where we enjoyed a private tour and sampling session – and learned some whiskey etiquette and all about the unique peaty flavor of this precious drink, some would say that it is an acquired taste. The local pub where we spent the night had over 300 different whisky’s on offer, but we didn’t manage to try them all, preserving our heads for the morning I instead gave the guys a private screening of the new Wheels 4 Life film which will be released in June.

Danny had told us about one of his ancestors, the Giant Angus MacAskill, who lived some 150 years ago, and according to the Guinness Book of World Records he was known as the largest true giant measuring an impressive 7’9” or 2.36cm. Danny’s parents run a tiny local museum and it was a pleasure meeting them and listening to their stories about Angus and Danny and the similarities in terms of their success and fame. Overnight the notorious Scottish clouds and rain arrived, which didn’t hold us back from doing another, very wet and technical XC ride through Glen Sligachan and along the shores of a beautiful loch. The

weather merely added to the dramatic mystical landscape, creating an atmosphere not dissimilar to Lord of the Rings. One of my favorite moments came, after we all had been wondering why Peaty had brought such a large backpack; and instead of the usual contents one would pack during a long ride, he pulled out a small coal grill, sausages, beers and some firework rockets– we all had a good laugh out of that. Typical Peaty, who needs a rain jacket when you can have a beer instead? There are endless trails and very few people using them, we didn’t have to share the trails with any other riders all week long, except with some sheep and shaggy Scottish Highland cattle.

Our next destination was Torridon, the area north of Skye, on the mainland in the Scottish Highlands, we were staying at a very remote fishing cabin on Loch Damh, a very peaceful and beautiful place, that is, at least until we got there. We had a helicopter chartered to take us to some isolated mountain ridges, where we dropped in on our big bikes. It is always something special to slice through the air in a Heli, we all had big grins on our faces, we were just like excited little Kids again. It was very cool to have 3 generations of riders on this trip, we all have a different forte but are all influenced by each other and by

the same common background of riding very technical terrain. Many things have changed since I pioneered the early freeriding days with my trials riding exploits, not only the technology of the bikes but the limits which are possible are at a level that I could have not dreamt of 20 years ago. Boundaries are constantly being pushed forward and that continues to inspire us all. I’m thrilled, after all these years, to still be a part of the mountain biking movement and to see it and experience it first hand with one of the fastest and one of the most progressive riders ever. It was a delight to follow Steve and Danny, even though, I sometimes had to catch up and it was with cheer amazement that I tried to comprehend some of Danny’s lines and moves.

A gigantic bonfire at our hut, burned late into the night, as the boys kept dragging wood out from the hills; fireworks and other party supplies ended up interrupting the silence of the night.

The last day provided us with some more downhill trails, before we ended up in Aviemore a Scottish mountain resort in the Cairngorms and the town where Danny lived for a few years. At last I got to ride my trials bike at Danny’s old stomping grounds. Old School meets New School, and let me tell you this is not the last we’ve heard of Danny, he has many plans and goals that he wants to achieve and he definitely has not reached his limits yet. Even Peaty busted out some trials moves before we raised a final glass of fine Scottish malt…. Here’s to the good life! 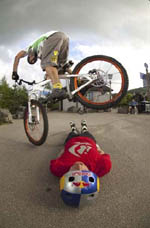 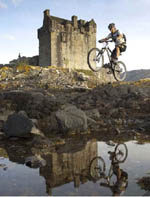 All photos copyright by Andy McCandlish, please contact him for usage: [email protected]