A 5-day urban adventure in Italy – from the Amalfi Coast via Pompeii, Vesuvio Volcano, Napoli and Ischia Island on MTB and eMTB

About 2000 years ago there was a gigantic explosion releasing 100,000 times the thermal energy of the Hiroshima atomic bomb. Mount Vesuvius volcano erupted and spew its lava and ashes over 20 miles into the air; several Roman settlements were obliterated and buried underneath massive pyroclastic surges and ashfall deposits, the best known being Pompeii and Herculaneum.

Napoli, as the Italians call the city of Naples, was my most recent destination for yet another ‘urban adventure’. The idea was to traverse this historical city and surrounding area on bikes in 5 days. From the breathtaking Amalfi coast, via Pompeii to the crater of the Vesuvio, into the urban jungle, history, culture, traffic and chaos of the 3000-years old streets of Napoli to the beautiful island of Ischia in the Bay of Naples.

There is no better way explore and experience such a place then by bicycle. I was joined by different friends for different stages of this tour and it was really cool to meet many of the local riders who showed me their best spots, trails and restaurants in their hometown.

Finding the ideal route, best trails and most interesting sights, is a lot harder than one would imagine. I’ve been spending months researching online with the help of google earth as well as some local contacts.

I must admit I was very nervous about doing this trip, everybody kept warning me, while I was planning this ride, how dangerous of a city it was, how the crime rate was off the chart, how influential and corrupt the Camorra was, an Italian Mafia-type crime syndicate. Two Italian photographers, who I had invited on this trip, declined to join me, saying it was way too dangerous and we would be robbed and mugged before we got started.

Ultimately, I convinced Swiss photographer Martin Bissig and French videographer Cedric Tassan (VTOPO) to join me, we met up at the tourist town of Amalfi, which is roughly 40 miles South of Naples at the Gulf of Salerno, surrounded by dramatic cliffs and coastal scenery.

We also met up with Ottavio Massa, an Italian mountain bike guide, who has helped me with the planning of this project and who established the contacts to the local riders.

Amalfi’s culture has flourished for centuries, from the ancient Greeks that settled in the area to one of the most important ports of the Middle Ages to today’s popular honeymoon getaway.

The food and restaurants lived up to their reputation, fresh authentic Italian delicacies, pasta al dente, seafood from the local fishermen, tasty tomatoes, local olive oil and vino and the most delicious and mouthwatering gelato were a great start before we started early the next morning on the famous ‘Path of Gods’ trail, that traverses the steep cliffs and villages high above the coast line. This trail is not exactly a bike trail nor is it beginner friendly, one cannot be intimidated by the exposure and the many steps. Parts of the trail literally go by and through people’ gardens, tiny villages with streets barely wide enough for one small car at a time, and views to die for – literally. As they famously say “Vedi Napoli e poi muori” – “See Naples and Die”, we weren’t quite ready for that yet. It was only Day 1 and we already got to experience Italy at its best on every level, except for the weather, some dark clouds overshadowed us, and when we finished the section of the ‘Sentiero delgi Dei’ path we had to seek shelter in bar for an espresso break, before we would cross the mountain range that separated the Amalfi coast from the Bay of Naples. We rode regular mountain bikes (GT Sensor full suspension bikes equipped with Shimano parts and Stans wheels). While on some of the days I was planning on riding an Ebike, which would be especially great for the stages inside the city in the days to come.

After an early start we reached the crater of the Vesuvio Volcano on Day 2. My sister Silvia, who lives in Italy and has a mountain bike touring company and a boutique bike hotel in Umbria (Alps Tours/ Countryhouse Villa Rey) joined Ottavio and me as a surprise guest on this day. She has been biking for many years and always wanted to join me on one of my adventures. She chose the perfect day and location. Riding the crater rim around this legendary volcano will always be remembered with its views over Naples, Pompeii and the entire coastline all the way to the island of Ischia, where I would finish my TransNapoli traverse in a few days’ time. The crater measures 1,000 feet (about 305 meters) deep and 2,000 feet (about 610 meters) across; it was formed during the last the eruption of 1944. This was perhaps one of the most spectacular locations I ever had to chance to ride my bike at, and believe me, I have been to many incredible places during my biking career.

The trails around the backside of the volcano were really good and we had them to ourselves, since we had a special permit to enter this area since it had been closed after the recent wildfires. It is like a little micro climate with very lush vegetation at Mount Somma and the Valley of the Giants, that are all part of the Vesuvio massif. The mountain measures today 4,203 feet (1,281 meters), it used to be about twice the size before its infamous eruption that would cover the surrounding villages in lava and ashes. It was eerie to think about the devastation that happened at this very place where we were riding and what it must have been like, when this mountain raged and wondering when it might get angry again. The sulfur fumes are a reminder that it’s just a matter of time.

Arriving in Pompeii and Herculaneum made it even more real, two of the old Roman towns that were destroyed and preserved. Life ended here in an instant 2000 years ago, and the remains of dead bodies, preserved in the ashes, bear witness.

Day 3 was the beginning of the urban assault, I switched over to my eBike to conquer the streets and neighbor hoods of the ancient city that is home to 1 million people.

Naples has some crazy traffic, with a cacophony of noise, a mixture of blaring horns and screeching brakes as cars and motorcycles jostle and joust for their piece of the road. MTB’s turned out to be the best vehicle to see and feel this buzzing city. Neapolitan traffic is notorious, it’s chaotic like in developing counties and by some miraculous and common understanding it works. To avoid it, one can use its back alleys and many staircases to cut from one district to another. Ancients streets decorated with laundry lines, markets with colorful fruits, vegetables and fresh seafood, pizza stands, cafes, and souvenir shops. The world’s oldest pizzeria is from here and many argue that one can find the best pizza in the world in Naples. Whisking through traffic, dodging cars, pedestrians or scooters eventually I ended up at the seafront by Castel Nuovo where I met a whole bunch of local riders for an additional evening session.

Day 4 we had to ride all along the urban coast line from the center to the Northern part of the city to the ancient port of Pozzuoli and Europe’s ‘youngest’ mountain, Monte Nuovo is only 134m/440ft tall and was the result of a volcanic eruption some 450 years ago. For the remaining days I was joined by an Italian friend of mine, Julian Giacomelli. We had ridden together many times before in Livigno, it was nice to have him along. He is an exceptional skier and his biking skill aren’t bad either. We even got to take our bikes to the underground tunnel systems beneath the city, Napoli Sotterranea, and ride through these antique corridors and tunnels that have been used since before Christ as cellars, cisterns or shelters.

We passed by the famous Napoli football stadium where Maradona played in his heydays, and almost got to ride across the pitch, but only almost. Nearby was a shocking reminder, of Napoli’s toxic waste problems. Due to the corrupt mismanagement of the Camorra, who dumped toxic materials that would poison many sites and village, one of these areas, a former industrial estate, is a very big parcel of ocean front property, near Bagnoli, that is now a complete inaccessible and contaminated ghost town.

I have to say, I really embrace ebikes, even though I’m not ready to give up my regular bikes yet, loving the perks the pedal assist, class 1, bikes have. Not only can one pedal further and steeper than before, but even riding up staircases becomes a possibility and we found lots of them. The 504Wh pedal assisted Steps 8000 motor Shimano has developed is not like a motorcycle, nor does it have a gas throttle, instead it feels like a bicycle with a little extra ‘vavavoom’. It opens up many new ways to enjoy two wheels.

Early the next morning we took the ferry from Pozzuoli to the idyllic island of Ischia. The island is only 10 x 7 kilometers across, it is towered over by Monte Epomeo, its highest point. Many people believe it is a high energy power source and according to people who believe in a hollow earth theory a gateway to the legendary underworld city of Agharti/Agartha.

It was worth the steep climb to the top at 789m/2600ft. even thought it was raining and we couldn’t enjoy the views until we dropped below the cloud layer. There was an amazing trail network in the mountains, and we got a good dose of real mountain biking after the prior days in the city. The riding was rather rocky and technical. We passed by thermal hot springs and crossed some vineyards before we ended in the picturesque fishing village of Sant’ Angelo.

The personality of the people of Neapolitans, to me, can be described as loud, with dramatic gesticulation, effusive emotion, warmth and passion. There is a need to fuel their unrestrained enthusiasm for life with excellent yet simple food, created with the fruits and vegetables that grow rich in flavor under the warmth of the sun and the rich volcanic soil. If you consider life in Italy as La Dolce Vita, then head south, because Naples is the epitome of Italian sweet life.

With this on our minds we toast to ‘La Dolce Vita’; to celebrate the end of our 5 days ride, with some Limoncello, a tasty local lemon liqueur.

Note: TransNapoli documentary film will be released in early 2019 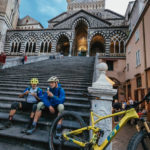 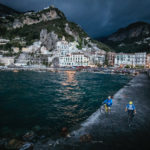 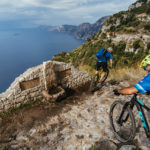 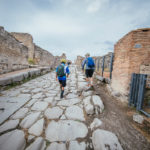 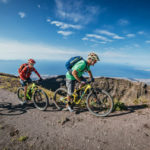 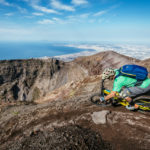 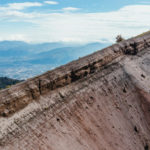 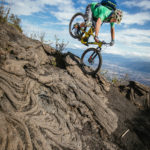 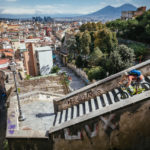 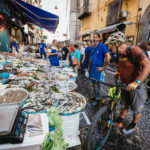 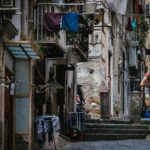 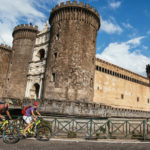 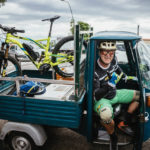 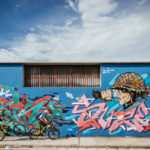 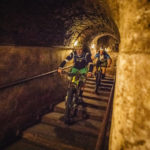 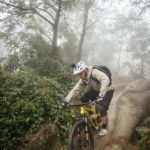 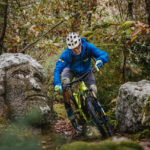 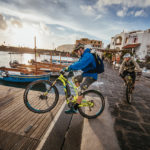 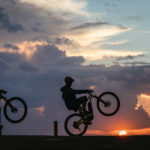