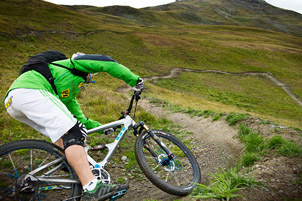 Hans Rey has been working for Livigno and the region for the past 7 years as a testimonial, consultant and spokesperson. His involvement has not only helped to make Livigno one of the top mountain bike destinations in Europe, he has also raised much awareness for Livigno in the media and with his Flow Country trail concept he has recently pioneered some new global biking trend which has put Livigno in the spot light of the international mountain bike scene. Rey is an international bike star, some say the most famous in the world; he is originally Swiss, who was raised in Germany and has lived in Laguna Beach California for the past 25 years as a pro biker. He has travelled with his bike to over 70 countries, a former Trial World Champion, Mountain Bike Hall of Famer and pioneer of Freeride. His adventure trips have been televised all over the world, including the 2005 Alta Rezia Freeride film with Thomas Frischknecht; and he has been featured on the cover of over 300 bike and sports magazines. Hans also has a non-profit charity, ‘Wheels 4 Life’ , which gives bicycles to people in need of transportation in the Third World. We recently caught up with Hans, who spends several weeks each summer in Livigno.

Q: Hans, why are you in Livigno?
A: I always had a passion for Livigno, when I was 8 years old – in 1974, I came for the first time with my family for a hiking holiday. Thirty years later in 2004 I was approached by Fadri Cazin about becoming part of the Alta Rezia project as a testimonial. I was immediately enthusiastic, not only because of my passion for Italy but also because I had heard good things about the new biking trails around Livigno (Panoramica/ La Pedaleda course) which were even partly build by the major of Livigno, which was very impressive. The Alta Rezia project seemed a great opportunity to take mountain biking to a new level and to promote this region in the heart of the Alpes.

Q: What makes Livigno so special?
A: Livigno has great terrain and mountains, but more important it has a great infrastucture for biking. When I first started biking in Livigno in 2004, it already had some really nice and even flowy trails, it had biking maps, bike hotels, lift access, the Mottolino Bike Park was starting up and the Mountain Bike World Championships where scheduled for the following year. Since those days 7 years ago, a lot has happened for mountain biking in Livigno. Its not only one of the major hubs for Transalp bikers (many riders who cross the Alps from North to South have to come though Livigno), but is also has now nearly 15 bike hotels, it had several events from Euros and Mundiale to FreeWheel Festival, La Pedaleda, Nationalpark Marathon and Transalp Race stages. The Bike Park has become very popular and known all over the world and many famous cyclists from all disciplines come to Livigno to train because of the great conditions and high altitude. And many photographers feature Livigno and the bike industry launches products, tests, etc… What is unique is that there is something for any kind of biker. The bike world is very diverse – its not an easy market to please – since there are many different disciplines and people have different motives why they bike. Each type has its special needs.
The times are over that bikers just want to ride on fireroads (strada bianca) or on hiking trails, both are far from ideal. Its time to not only improve the infrastructure but also the trails. Because that’s the main reason why bikers travel to places is the quality of the trails and the riding experience. That is also one of the thoughts of my Flow Country Trails idea.

Q: What is Flow Country?
A: Flow Country is a word for a certain kind of Flow Trail. Flow is the big word in the mountain bike language and in my opinion also the future for our sport; but there are many different kind of Flow Trails, from the old trail near Alp Trela to the fun freeride trails at Mottolino they all have flow – while one is more for Cross Country riders and the other more for freerider. Some of the  Flow Country characteristics and standards are – that they are never steep, never extreme and never dangerous. Everybody can ride them from beginners to experts on any kind of bike. I think this kind of trail has a lot of future, more and more mountain bikers discover the fun and rollercoaster feeling, which can be very addicting. I built the first official Flow Country trail in the world together with one of the top trail and bike park designers Diddie Schneider in 2009 in Livigno in concunction with APT Livigno and Giorgio Zini. This was just a short test trail to show everybody what it is and what it will look like. Since then the trail has received a lot of international media attention and in 2010 Livigno hosted the 1. Flow Country Conference with trail builders from all over Europe and with IMBA (International Mountain Bike Association), who promotes this new trend now globally.
My vision is to build more of these trails, because mountain bikers love them and it also solves the conflict with hikers, if bikers get their own trails.

Q: What do you think is the future of mountain biking in Livigno?
A: Our sport has many futures. Livigno is lucky to be on the forefront of this movement thanks to the initiatives of many local individuals and organizations who have all contributed a lot to the success. However, we cannot stand still – all the other regions in the Alps and even in the low lands are now also realizing the potential and the touristic impact mountain bikers have. Livigno needs to continue their efforts and build more and even better trails, improve the infrastructure and draw attention with big and interesting events. All these things combined will guarantee Livigno continued success in the next years, especially since  our competition from other regions  is growing and often they are easier to reach by car or airplane.

Q: What are the biggest challenges?
A: There are too many different decision makers and interest groups. Its very difficult to get everybody to agree on something, and that’s why things often move too slowly or not at all. Its not one single idea, project or event that will make Livigno successful, it is a combination of all and we are all sitting in the same boat. I’m very happy that the Alta Rezia project will continue again in 2012 – that will help the whole region to become more interesting for bikers. Livigno will benefit from the biking  activities  and initiatives in nearby villages like Bormio, Tirano and St. Moritz. Our main competition is not within 50km of Livigno. But even within Livigno everybody needs to work together and not on their own. I often find myself as the link between the many different interest groups, starting from APT, Commune, Mottolino, Carosello, Bike Hotels, Bike Shops, Bike Guides, Riders, Bike Clubs, PR agencies, Communita Montagna, Valtellina, Alta Rezia, Media and many individuals.
We are going in the right direction – just look around Livigno during the summer, even when it rains, we have approx. 5 times more bikers than we had 5 years ago.

Q: What is your favorite place in Livigno?
A: That a tough question – my heart and soul is at the moment with the Flow Country Trail (between Mottolino and Camanell); but also Madonna delle Rese, because that’s the spot where I got engaged to my wife Carmen.