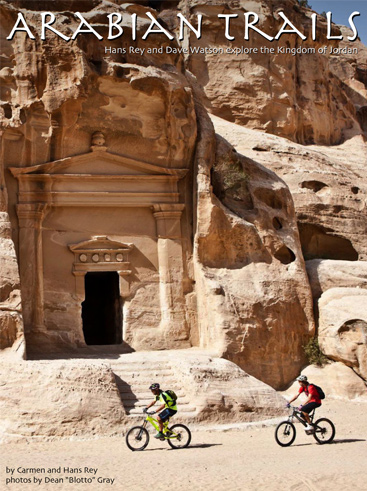 Hans Rey and Dave Watson explore the Kingdom of Jordan

By Carmen and Hans Rey
Photos by Dean “Blotto” Gray

When I received a phone call from the producer of the popular TV series, ‘Ride Guide’ asking me if I would like to go with them to Jordan in the Middle East, I was pretty excited. Jordan has been on my “Places to ride” list for a long time. Who wouldn’t want the chance to explore this ancient land as a biking destination? Most people have seen pictures of the sandstone city of Petra, I wanted to do more than see images, I wanted to be there and be in them. With that in mind, I hesitated for, oh, about a second, before I of course, said yes.

My riding partner was legendary freerider and downhiller Dave Watson, best known for his infamous jump over the Tour de France in 2003, he has recently signed to ride for GT Bicycles.

Cory Horton was our cameraman and Dean ‘Blotto’ Gray, our photographer. Blotto is known for shooting the best snowboarders in the world including Shaun White, he is also an in-house photographer for Burton. We hadn’t worked together before, but as is the case with these trips, we got to know each other pretty quickly. We hit it off, working hard, but having plenty of laughs along the way and while having a pretty amazing trip.